With organizational change, issues can occur. There are practices, or tools, which can be used to give a more systemic view of the issues, which can help lead to resolution. In part two of this two-part interview with Agile leader Esther Derby, we dig a little deeper into tools she will be discussing at the Agile 2011 conference in her presentation, “Seeing and Steering the System.” Read part one.

Matthew Heusser: Your talk at Agile 2011 will cover three tools: Eoyang CDE, Expand the Horizon, and Finding Factors. Let’s start with CDE. Can you tell us what that is?

Esther Derby: Each of these tools aims at providing a different, more systemic view of a situation. CDE stands for Containers, Differences, and Exchanges. I learned about CDE first in a book called Facilitating Organizational Change by Ed Olsen and Glenda Eoyang. Later, I had the opportunity to attend an intensive workshop with Glenda where we studied this and other human system dynamics tools. Containers hold the focus of the group. Containers can be physical (a team room), organizational (a department), or psychological or conceptual (a goal or a set of professional concerns).

Exchanges are the flow of value (information, money, energy, social connection) within and between containers. Exchanges might be allocated funds, salaries, policies, formal and informal communications, feedback loops.

When I'm trying to understand a puzzling or problematic aspect of organizational performance, this is a good place to start. CDE gives clues to structural factors that drive behavior. And, by glimpsing those structures, you have additional options for action.

Heusser: Can you give us an example of a time you used CDE?

Derby: Sure. A fellow I coached (I'll call him Todd) was responsible for a product that had stakeholders across the large organization he worked in. He was trying to work in time boxes, and had set up a sort of stakeholder council to set priorities. Both reasonable approaches. But, one vice president consistently overrode council-- even though he had appointed one of the members. Todd had published procedures (an exchange), talked with the VP (also an exchange), and asked the VP to join the council (expanding the container of the stakeholder council). None of which changed the VPs behavior.

So we looked at the various containers and exchanges in this system. It turned out that the VP was working on a new, high-profile business offering and he had meetings with that group on a cycle that didn't line up with the stakeholder council meeting. So he was trying to get a potential profitable product on-line, and because it didn't line up with the council meeting and development time box, he was constantly superseding the work of the council.

Given Todd's sphere of control, he couldn't change the business meeting cycle. But he could change the development time box so it lined up better with the new business initiative. It was a simple change, caused little disruption, and virtually eliminated the need for the VP to override priorities set by the council.

Too often, when people want to change a pattern in an organization, they resort to telling (as in publishing procedures). But the behavior wasn't driven by a disregard for the process. It was a real business need and re-aligning the time box (a container), changed the pattern.

This is just one example of how managers and people without management titles have used CDE to shift patterns in their organizations by making small changes that were within their control. It's much more effective than exhorting other people to change or blaming them for not getting it. Todd's change might seem obvious reading this story, but it wasn't obvious to him until he starting thinking in containers, differences and exchanges.

Heusser: Very interesting! I can see how that would be a helpful way to examine the situation. Let's move on to Expand the Horizon.

Derby: Expand the Horizon is another tool for understanding the shape of a problem and implications for the broader system. Here's one that came up recently. A manager noticed that many people were habitually late for meetings. So he imposed a ground rule (an exchange), "Show respect, arrive on time for meetings." He framed the problem as one of individual responsibility and character-- disrespect for other meeting participants. And as such, his solution was that people should mend their disrespectful ways.

I think the easiest way to explain how to Expand the Horizon in this case is with a picture. A wider view shows interconnections, complexity, and effects beyond a single meeting. From this view, the “showing up late” problem has much more serious effects than annoying and inconveniencing other meeting participants. Start with the visible problem and then see how it ripples out and affects other parts of the organization.

Heusser: Okay, Esther. I see a sort of hub/spoke brainstorm. How did you create it, and can you walk us from this diagram to problem resolution?

Derby: I started with the stated problem in the center "People are late to meetings." Then I started drawing out from there, looking at which people and groups were also affected by the pattern. The purpose of the diagram is to move out of seeing issues as isolated events. Often, when people see more about the problem, they find a bit more energy for shifting the issues. 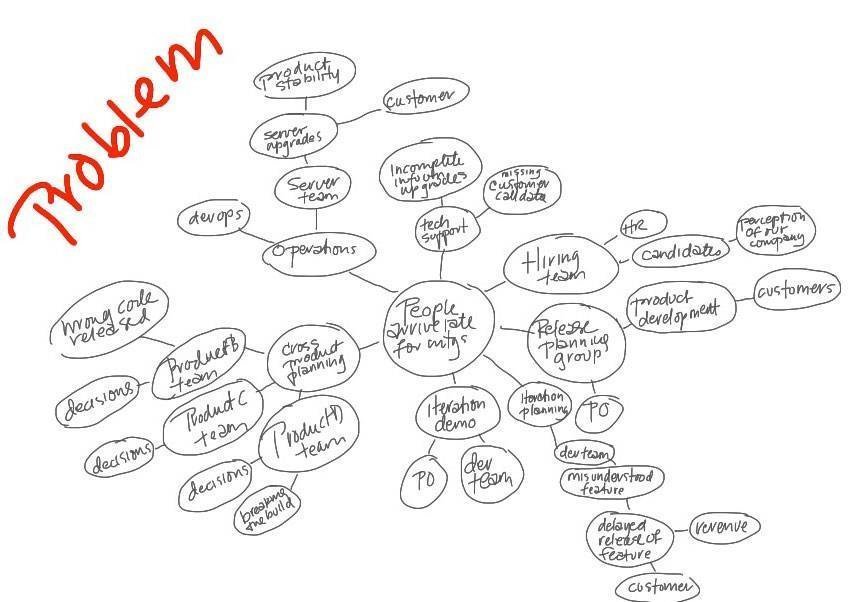 In this case, I might brainstorm factors that might be contributing to the problem. Depending on what came up, I might do another sort of analysis (maybe CDE). Or I might just look at the factors and see which ones were within this managers sphere of control.

But there are more complicated situations where I might dig a little deeper, get some data and draw some Behavior Over Time (BOT) graphs to show how the factors interact, or time series to show patterns over a longer time horizon.

Heusser: This has been great, Esther. Where can we go for more information?

Derby: Well, there are many stories, examples, and essays about systems thinking and management on my website, http://www.estherderby.com.

To learn more about Glenda's work on Human Systems Dynamics, check out http://www.hsdinstitute.org/ or look up Influencing Patterns for Change: A Human Systems Dynamics Primer for Leaders, by Royce Holladay (Glenda's sister) and Kristine Quade. Pegasus Communications (http://www.pegasuscom.com/) is a great source for systems thinking tools. And of course, every systems thinker should read Thinking in Systems by Donella Meadows.