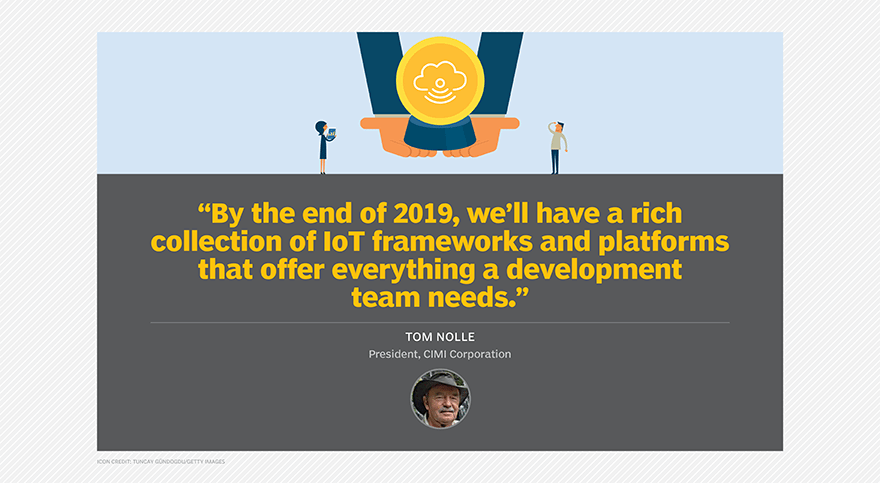 Most IoT tools are primitive traffic analyzers that require an understanding of the specific device control protocols or simple device inventory managers. Worst of all, development teams must integrate all of these little, disconnected capabilities themselves.

But the emergence of IoT frameworks is one of several software development trends that could occur in 2019, starting with three major public cloud providers: AWS, Google and Microsoft Azure.

Both Amazon and Google work with third-party sensor and controller vendors to provide an IoT gateway to their voice interfaces, but the initiatives have limited benefit because of the heavy lifting necessary to complete the integration. And this challenge complicates testing, because the resulting integrated system is really two loosely connected pieces. Expect Amazon and Google to extend the scope of their voice agents directly to the IoT elements to address this issue.

Microsoft's initiatives in IoT development and testing will come as a byproduct of its fall 2018 Windows 10 update, which improves the integration of the Android and Windows 10 OSes. Cortana, Microsoft's voice assistant, is available on Android and iOS, as well as Windows, but it's not as popular as its Amazon or Google competitors. Look for Microsoft's Android integration to accelerate in 2019, and it might include its own IoT and facility control integration, with a possible introduction of a home hub late in the year.

Each of these initiatives will create unified IoT frameworks for development, testing and deployment in the cloud. That will induce IoT vendors to broaden their own offerings and encourage startups to create better integrated IoT platforms -- both for the cloud and on premises -- to compete with the major vendors. By the end of 2019, we'll have a rich collection of IoT frameworks and platforms that offer everything a development team needs, a result that will, in turn, advance IoT deployments.

Tom Nolle is the president of CIMI Corporation, a technology consultancy.