This content is part of the Essential Guide: Developer shortage survival guide 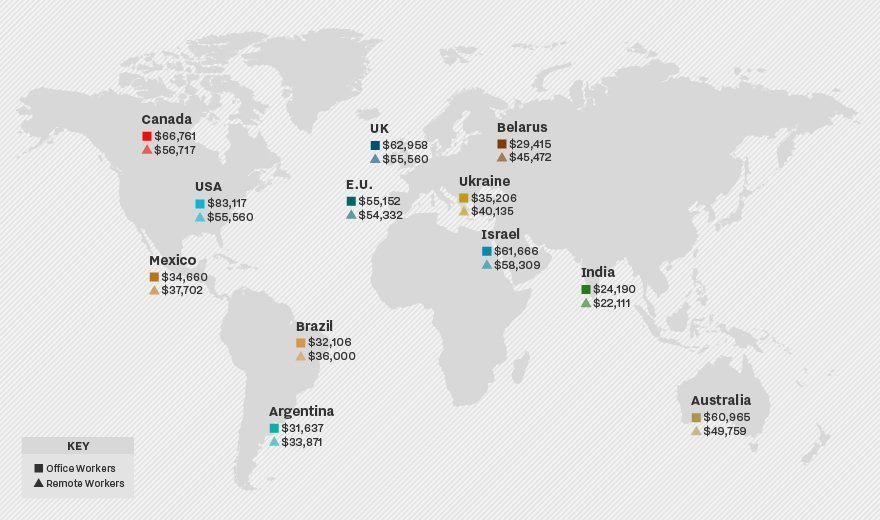 Software developer pay trends vary widely around the world, a fact that reflects supply, demand and a whole host of other factors. It's clear that demand has exploded, as job postings for software developers in the U.S. have jumped nearly 90% in the last year. And universities are expected to graduate only 30% of projected demand for developers by 2020, making the shortfall even worse. But supply and demand are only part of the story.

In this graphic, the darker dots represent an office-bound average software developer paycheck and the lighter dots denote remote workers. Working in the office is generally more lucrative, but with the worldwide developer shortage, opportunities to work remotely are exploding.

Outsourcing has always been an option, but now with the shortage, it has once again become a popular short- or long-term go-to strategy for employers that might otherwise have projects waiting for the right employees. That outsourcing opportunity more than likely explains the higher work-at-home salaries in Belarus and the Ukraine, where a technology-and-engineering-oriented educational system has created lots of skilled software developers available to hire. To a lesser degree this is also true in Mexico, Argentina and Brazil where, again, skilled developers are being hired by outsourcing firms for jobs around the world.

Clearly, in many parts of the globe, being a software developer is a well-paid proposition. What other factors influence salaries? According to research pulled together by research group Funders and Founders in late 2014, it's complicated.