Today's software developer duties include being a multitasking pro 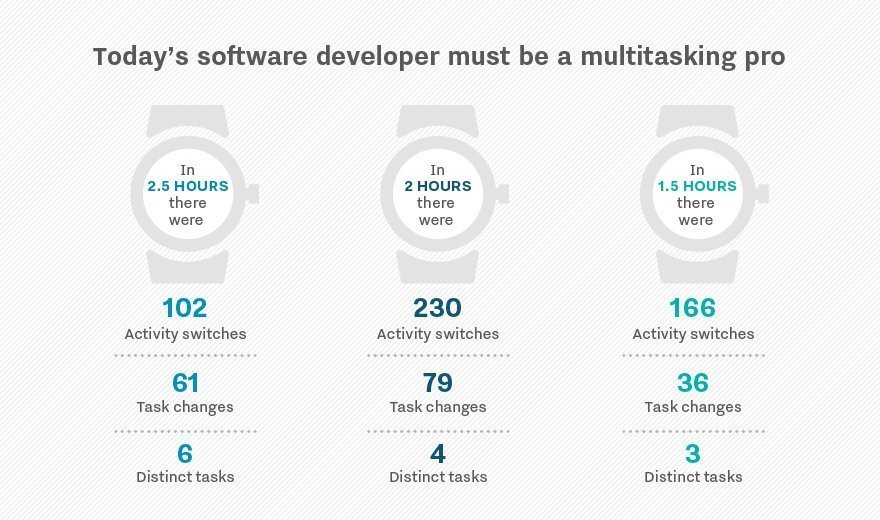 Developers are multitasking pros, but this chart, which is based on direct observations of coders at work, might cause your head to explode. That's especially true if you're a developer because you probably have no idea how many times your software developer duties change gears in a relatively short period.

Consider the first developer, who in roughly 2 1/2 hours switched activities 102 times, tasks 61 times and worked on six distinct jobs. That pace shows a lot of going back and forth.

"Developers are extremely good at making use of all their time," Tasktop's Murphy explained. "While they're waiting for one thing, they switch to another thing and move fluidly between tools and activities."

But while they're absolutely multitasking pros, they're also not necessarily keen to be interrupted by just anything or anyone. In fact, how willing programmers are to be disrupted is something Murphy wants to look into further. "Developers working on a team learn when someone else is 'interruptable,'" she said. "But when you start to ask developers to interface with other parts of the company, they don't see their work patterns and priorities," and that notion can make it very challenging to have those groups work effectively together. "You don't want the rest of the company to think developers just spend their day triaging tickets."

The other tricky bit with all these software developer duties is the huge dependence developers have on tools. Murphy's group regularly saw six or more tools in use in a single session, something which she said should eventually be streamlined to make it easier for more people to acquire development skills.