The participants had a striking depth of knowledge and level of expertise. Many of the conferences I attend in the U.S. are aimed more at “newbies.” The sessions here were challenging and required good grounding in basics of testing. Many of them also assumed a fair amount of Agile experience.

Presenters came from the research and academic world as much as from the business world. For example, Jeroen Boydens, Piet Cordemans and Sille Van Landschoot reported their research on doing TDD with embedded software. The topic alone is sophisticated, and I did get in a bit over my head. Since this was a small conference -- about 130 participants -- I got a chance to talk to the presenters later. They explained that their session merely presented pros and cons for three different approaches to doing TDD with embedded software. It was up to the participants to decide which one was appropriate for their situation. Oh! Nobody was spoon-feeding participants here.

Most sessions were presented in a surprisingly creative way. I enjoyed the multi-presenter sessions. John Bertens and Remco Oostalaer played out a fun dialog between “old and new generation testers,” complete with videos from their “stakeholders.” They opened my eyes to the capabilities lurking in the cloud -- some of which I’ve been unknowingly using. This was a message I hadn’t heard at U.S. conferences -- maybe I just didn’t get to the right sessions.

One obvious difference between conferences in Belgium and every other country in which I’ve gone for conferences: beer and wine are served at lunch! (Well, beer is cheaper than water in Belgium, so it makes sense they’d offer it). And yet, nobody fell asleep after lunch.

The first day of track sessions and keynotes ended with lightning talks on the future of testing. I’ve seen lightning talks at U.S. conferences, but having them the concluding highlight for the day, with all tutorial presenters doing talks, was new to me. I was fortunate to be chosen to give a lightning talk, and I discussed the Agile value of courage. The talks created a buzz that carried over to the following day.

The social and networking activities at Belgium Testing Days was also unique. Have you ever watched an improv troupe riff on what testers do at a conference? These folks were brilliant, entertaining while making everyone feel at home. It was amazing to me that this Belgian troupe was able to make everyone crack up even though they were having to perform in English, which is not their native language! 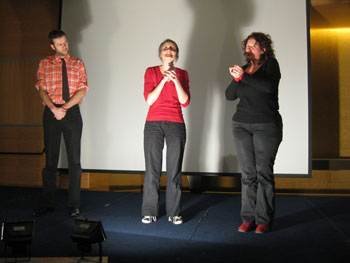 Another innovation at Belgium Testing Days -- a surprise breakfast talk. Wilfried Verachtert from ExaScience Intel Labs brought us up to date on the good, the bad and the ugly in chip and supercomputer development. Did you know that chips are now about the size of a strand of DNA? Or that it’s possible to have a supercomputer requiring the power generated by three nuclear power stations? The future of 3D stacked chips, concurrent programming and non-deterministic programs presents many challenges for testing. What do you do when a program never runs exactly the same way twice? There are lots of problems, and no answers yet; it sounds like science fiction, but they clearly have smart people.

My very favorite talk was from someone I previously only knew from Twitter. I love coming to different countries and meeting people in person that I only knew virtually. Nathalie Rooseboom de Vries van Delft, aka @funTESTic on Twitter, had a session titled, “Lessons Learned from Being a Casualty Simulation Victim.” Not only did I learn a lot about disaster simulations, but the parallels to software testing were clear. We need to make our testing scenarios as much like real life as we can, and we’ll learn a lot more from our mistakes and misfires than from the many things that go well. This session, with Nathalie’s personal experiences and awesome videos, made typical “talking head and death by Powerpoint” sessions seem especially dull. A session like this one really makes you think, and learn.

I was impressed that every presenter I met understood that culture is the basis for success for any testing and development organization. Many conference sessions I attend here in the U.S. do a good job of teaching process and techniques, but they don’t discuss the problems that occur when company culture gets in the way. Jamie Dobson and Jorrit-Jaap de Jong brought this home with their session “The Fifth Dimension: You’ve Just Entered the Financial Engineering Zone.” The multi-presenter format was again effective, and I found their ideas transforming. They cited research as well as sharing their practical experiences. Now I get it why so many organizations get stuck in chaos, and how they could move beyond it with a bit of extra effort.

Gojko Adzic’s session on “Winning Big with Agile Acceptance Testing” also contained breakthrough ideas. Can’t get the business to sign off on time to build a suite of regression tests? Talk about building “living documentation” instead -- everyone knows you have to document the system. I also had the pleasure of attending the local Agile Consortium user group meeting, where Gojko also presented. Some people drove several hours to attend this. The desire to learn is great in the Low Countries!

The diversity of skill sets in each participant was impressive. I met Jurian van de Laar on the first day of the conference. He was experienced in testing things like embedded software, and struck me as a bit of a geek. So I was surprised at his session topic: bridging the gap between developers and testers in a Scrum context. He shared a detailed process of how one company assessed the skills and attitudes of testers before starting an Agile transition, so they could help each in the most effective way. It’s always great to hear success stories like this.

I also learned a lot by participating in Markus Gaertner’s Testing Dojo. It was tricky to join this as it was scheduled alongside all the great track sessions, but I devoted one track session and a lunchtime to it. This helped me get closer to my goal of organizing a testing dojo here in my own hometown in the near future. 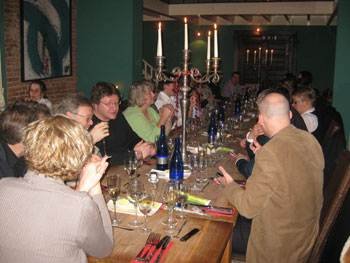 Maybe it’s the fact that cultures mix more frequently in Europe, or that their software industry seems quite progressive, but attending Belgium Testing Days was a new and rewarding experience for me. Each country I’ve been to is different. For example, people in the Nordic countries seem reserved and extra-polite and shy to participate until you draw them out. At conferences in Germany, the participants don’t hesitate to challenge any statement you make and discuss all aspects of it. Participants at the conferences I attended in India were polite and quiet, but so knowledgeable once you get them talking. The common thread in any conference, no matter the country or continent, is that you will meet other people who are eager to learn. I have many new ideas to experiment with now that I’m back with my regular team.