Selenium, the popular open-source automation test tool for Web-based software, comes in different flavors. This tutorial series started by introducing Selenium Remote Control (Selenium RC). However using Selenium RC requires knowledge of special commands, understanding the elements of an HTML page, and a fair amount of programming. Wouldn't it be nice to be able to record your own actions and convert those to Selenium commands, or, better yet, to record commands, insert some assertions, and just run the script back as a test, without all that complex programming?

There is just such a tool. It's called Selenium IDE.

A simple script recorded with Selenium IDE
IDE is an acronym for Integrated Development Environment. Using Selenium IDE, instead of having a program over here talking to a remote controller over here that drives a browser in a third place, the entire application runs inside the web browser. To do that, Selenium IDE was built as a browser plug-in for FireFox. Let's take a look at the software in-action, after I have recorded a simple script: 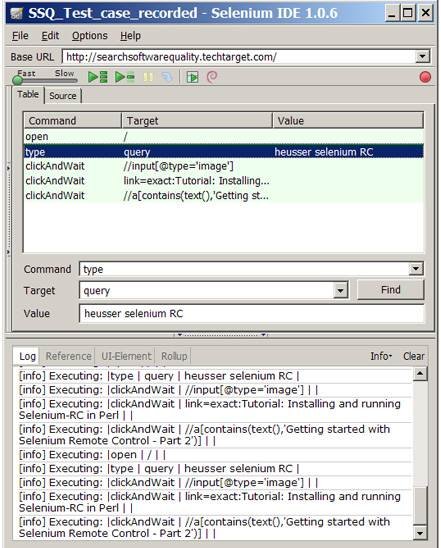 This will all be explained in more detail below, but I wanted to give you a quick look at what your Selenium RC screen will look like when we're through. To record this, all I did was start Selenium IDE, type http://techtarget.searchsoftwarequality.com (enter), and use the site to search for my tutorial on Selenium RC. With the test recorded, I can replay that test by clicking the green go button. The 'Base URL' for the test is SearchSoftwareQuality.com so we don't see that mentioned in the open method, but above in the Base URL field. With Web testing, often it can be tricky to obtain an element's id. However, Selenium is able to capture the ids in the target field as the tool is recording actions taking place in the Firefox browser.

One thing the test doesn't do (yet) is actually confirm any text on the screen -- it drives the browser, but doesn't inspect it. We'll talk about that later.

Before we can do that, let's talk about how to install Selenium. Then I'll cover more on how to use it effectively, and a little bit on how to save, re-use tests, and make test suites with the tool.

Installing Selenium IDE
We'll start by going to the openQA download page, which you can find at http://seleniumhq.org/download and clicking on the link to download Selenium IDE. That will take us to the Selenium IDE Add-On Installer: 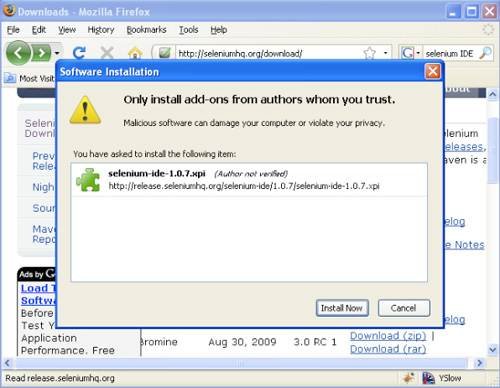 Now click the "Install Now" button to get started, followed by "Restart FireFox."

You should see a note that the new Add-on was installed, and that's it. You can start Selenium IDE by clicking Tools->Selenium IDE from your Firefox browser.

Now let's walk through creating that first test together in more detail; you may want to print this page out and follow along.

How test automation tools do record and playback testing

A Selenium IDE vs. WebDriver comparison