By
Have you ever come across a situation where you've needed a tool but didn't think you had the right one to get the job done? Like when you're trying to change a smoke detector battery or tighten a loose door knob -- it seems as if the tool you need is never handy, and you might even have to go out and buy it. What we tend to forget is that we can often solve our project needs with ordinary household items like a butter knife or nail clippers -- things that you wouldn't expect to use but can get the job done.

Now shift into the application security mindset and voila, there's Firefox Web Developer: an unlikely "security testing" tool but one that serves the purpose very well. It's not only handy via this quick download -- it's also free. Originally a tool for tweaking and troubleshooting Web pages, Web Developer (shown in Figure 1) has evolved over the past six years as a formidable tool for manually uncovering security flaws.

1. Under the Disable menu, you can disable the browser cache, JavaScript and URL referrers for manipulating application behavior and assessing responses to see what can be exploited.

2. Under the Cookies menu, you have the option to disable cookies and view cookie information for session manipulation to see what the user can see and do.

3. Under the Forms menu, there are lots of options for form manipulation (one of my favorite things to do and one of the biggest areas of exploitation) by populating form fields and analyzing the responses and even removing maximum field lengths to see how much junk the application can accept before it starts to croak.

4. Under the Information menu, you have options to view HTTP response headers, JavaScript and page information to show whether or not SSL is in use on the current page (a common oversight I see: not using SSL everywhere). There's also a link viewer to uncover parts of the site/app you may not have originally thought about testing, as shown in Figure 2.

On a related note, there's also an outline links function (via the Outline menu) that highlights page links that are hosted elsewhere. This comes in handy when you want to visually ensure you're not leaving the site/application you're testing.

5. Finally, under the Miscellaneous menu, you can do things such as show comments that often reveal more than they should and view hidden form elements that are easily manipulated using a Web proxy. 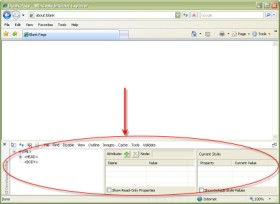 The Developer Toolbar is not nearly as extensive and useful for security testing, but it can be used for a few things along this line, such as disabling scripts and viewing cookies. Moving forward, IE 8 will have its own developer tools built right in.

Although the Firefox Web Developer extension is only part of what you need to test an application in-depth, it's an important tool nonetheless and one you shouldn't be without.